A deeper look at why team diversity works from HBR’s Alison Reynolds and David Lewis. Great to see the science behind what most of us intuitively understand.

Looking at the executive teams we work with as consultants and those we teach in the classroom, increased diversity of gender, ethnicity, and age is apparent. Over recent decades the rightful endeavor to achieve a more representative workforce has had an impact. Of course, there is a ways to go, but progress has been made.

Throughout this period, we have run a strategic execution exercise with executive groups focused on managing new, uncertain, and complex situations. The exercise requires the group to formulate and execute a strategy to achieve a specified outcome, against the clock.

Received wisdom is that the more diverse the teams in terms of age, ethnicity, and gender, the more creative and productive they are likely to be. But having run the execution exercise around the world more than 100 times over the last 12 years, we have found no correlation between this type of diversity and performance. With an average group size of 16, comprising senior executives, MBA students, general managers, scientists, teachers, and teenagers, our observations have been consistent. Some groups have fared exceptionally well and others incredibly badly, irrespective of diversity in gender, ethnicity, and age.

Since there is so much focus on the importance of diversity in problem solving, we were intrigued by these results. If not diversity, what accounted for such variability in performance? We wanted to understand what led some groups to succeed and others to crash and burn. This led us to consider differences that go beyond gender, ethnicity, or age. We began to look more closely at cognitive diversity.

Cognitive diversity has been defined as differences in perspective or information processing styles. It is not predicted by factors such as gender, ethnicity, or age. Here we are interested in a specific aspect of cognitive diversity: how individuals think about and engage with new, uncertain, and complex situations.

The AEM cube, a tool developed by Peter Robertson, a psychiatrist and business consultant, assesses differences in the way people approach change. It measures:

Having run the strategic execution exercise over 100 times and observed such big differences in the performance of teams, we decided to use the AEM cube to measure the level of cognitive diversity in groups undertaking the exercise. Our analysis across six teams who recently undertook the exercise shows a significant correlation between high cognitive diversity and high performance, as shown in the table below: 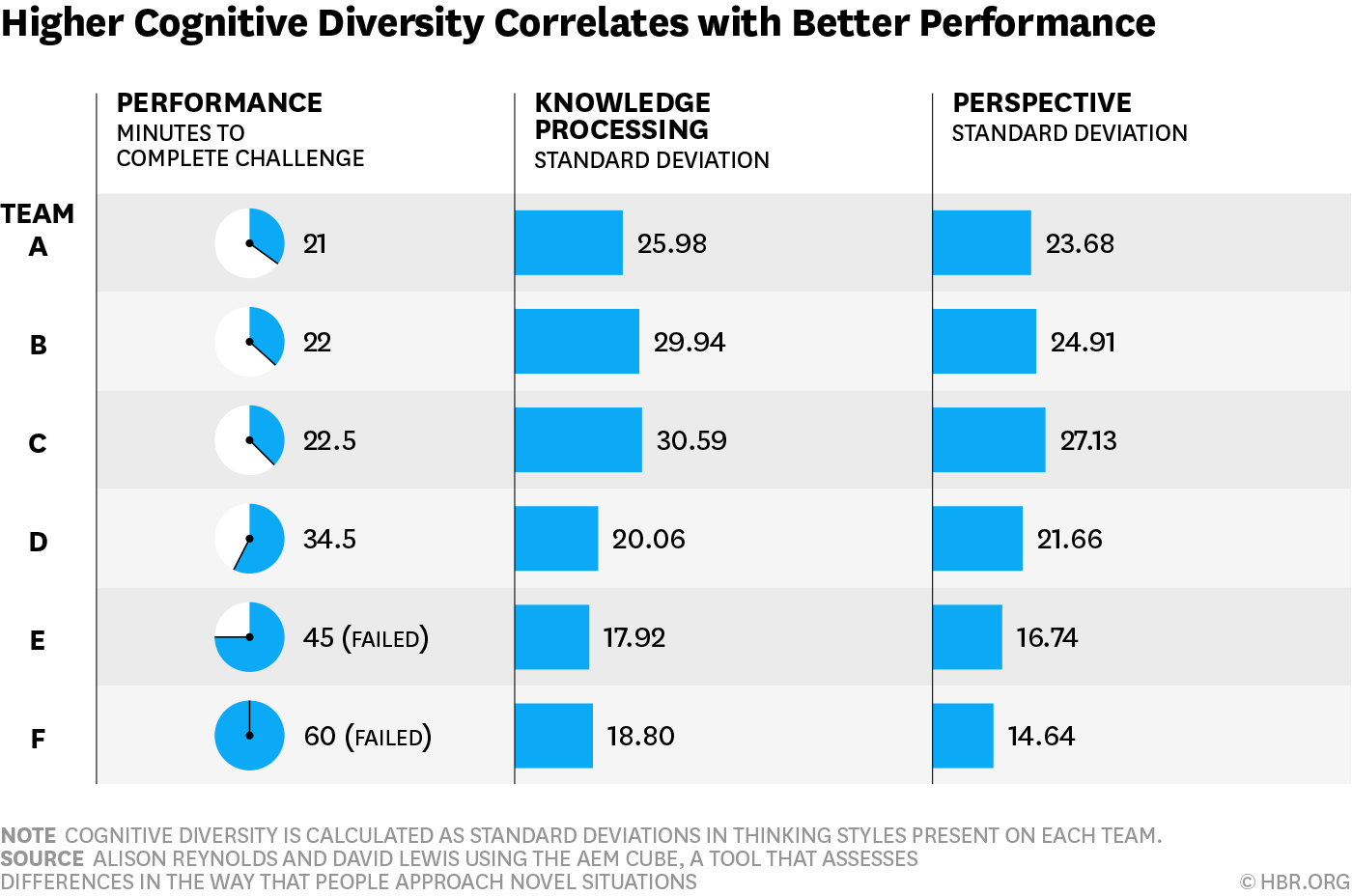 Intuitively, this makes sense. Tackling new challenges requires a balance between applying what we know and discovering what we don’t know that might be useful. It also requires individual application of specialized expertise and the ability to step back and look at the bigger picture.

A high degree of cognitive diversity could generate accelerated learning and performance in the face of new, uncertain, and complex situations, as in the case of the execution problem we set for our executives. Based on these indicative findings, we are continuing our research with a larger sample.